Last night after I’d gotten home, I sat down and watched a re-broadcast of Chanel 7 News.  And I listened with particular interest to the piece on Church Safety.

Church Safety, in particular, the safety of the other parishioners in my Church was one of the reasons I stopped going to Church.    Every Sunday when I arrived at Church, The Stalkers were already there waiting and eager to get started with their screams and taunts.  I know they disrupted the Service for me and I’m sure the rest of the Church felt the same way.

But mostly, I was appalled at how little respect people have today for the House of God.  I felt so bad that my Church members had to listen to all their garbage but so did God.

I maybe crazy, but at least I have the good sense not to act a fool in God’s house.  I just wish others could put down their imaginary (and sometimes real ones) grudges and do the same.

Today, I was supposed to start a ten day vacation that I’ve waited all year for.  But a not so funny thing happened.  My car was attacked, again!

END_OF_DOCUMENT_TOKEN_TO_BE_REPLACED

Picture courtesy of the blog, https://windupmyskirt.wordpress.com

Tonight, I’m going to make this short.  Not because I don’t have a lot to say, but because I do and I don’t that message getting lost in a lot of needless rhetoric.

My most endearing memory of my nephew, Shannon, is not that of the drug pusher or the gangbanger, but of the father that he was.

I remember on warm summer nights he would come up the back stairs, carrying his young son in his arms and knock on my door and ask, “Hey Auntie Sis, you got any juice boxes?”   My usual answer was yes.  Because I always bought extra for him.

Shannon loved his son and he showed it as often as he could.  Whenever, he was at home, he carried that child around with him everywhere.

Now, on this warm summer’s night, I miss the sound of his footsteps coming up the back stairs knowing that in two weeks his son will start another year of school without his father.  I also, think of all the things Shannon has missed –  his son’s kindergarten graduation, his son’s first day of regular school, report cards, parent/teacher meetings, watching his son play ball, taking his son to the park, eating ice cream cones, hot dogs, and swimming.

By the time Shannon gets out of prison, his son will be a grown man approaching his 40th birthday. 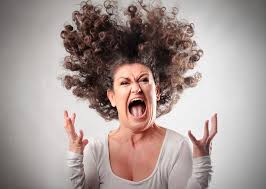 ANGRY ALL THE TIME?

Is it possible for someone to be angry ALL THE TIME? That was the question I asked myself yesterday as I sat listening to ‘The Voices/Stalkers’ and their usual angry tirade.

I know I was bored listening to it and I couldn’t help but wonder why aren’t they bored repeating it. So, I took to the Internet to find out why day after day, month after month, year after year, decade after decade they can still be so angry.

Here is some of what I found.

All that yelling, is it Anger or Rage?

Rage problems are conceptualized as “the inability to process emotions or life’s experiences” either because the capacity to regulate emotion has never been sufficiently developed or because it has been temporarily lost due to more recent trauma.

Rage is understood as “a whole load of different feelings trying to get out at once” or as raw, undifferentiated emotions, that spill out when another life event that cannot be processed, no matter how trivial, puts more stress on the organism than it can bear.”

So, instead of my having problems, it is far more likely that ‘The Voices/Stalkers’ are incapable of letting go of even the most trivial of personal violations. I know I can’t remember doing anything to them, even though they seem to believe I did.

The following article is from PBS, ‘This Emotional Life.”

Many people believe the myth of “accumulating anger:” if they don’t express their anger, somehow it will “build up” and they will develop high blood pressure, have a heart attack or a stroke.

There are many terms to describe this belief. We speak of “pent up,” anger that can “boil over,” or “leak out.” Moreover, we can “explode” – thus somehow “releasing” the anger and freeing us.

Expressing anger in an angry way, however, makes nearly any situation worse! Others often react to our anger, rather than the message we wish to impart. While we may hope that another individual will see the light and the error of their ways, this rarely occurs. When was the last time you expressed your anger in an angry way and were met with a response like, “please accept my apology, I am so sorry?”

The “hook” is a metaphor for avoiding the temptation to directly express anger. While there is nothing wrong with anger – it signals some kind of unhappiness or unmet need or goal. Gaining control of your anger and expressing it in a calm and collected way can help a great deal.

So, in other words STOP telling each other to let it out. Stop expressing your angry feelings. STOP IT! STOP IT! STOP IT ! That’s not healthy. And someone always gets hurt.

Proverbs 29:11 A fool gives full vent to his anger, but a wise man keeps himself under control.

A Tiny Kitten With A Big Mouth
By
Eliza Ankum
Author of
Ruby Sanders
One Three Thirteen Commander of the Day of Judgment
Flight 404
STALKED! By Voices